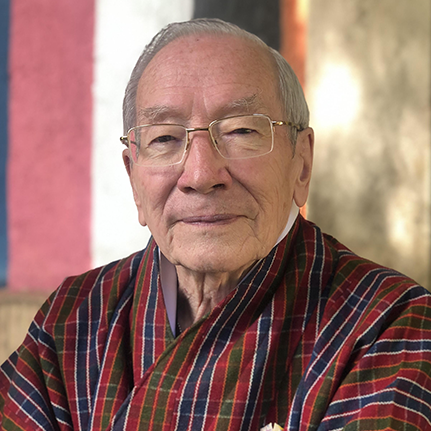 
Michael Rutland was born in London in 1938. He studied Physics and Mathematics at London University. He has worked in education as well as a Commissioned Officer in the military services of the United Kingdom and the Sultanate of Oman. Michael Rutland first lived in Bhutan in 1971, when he assisted in setting up the Ugyen Wangchuk Academy in Paro and taught Physics, Chemistry, Biology and Mathematics and taught the future Fourth King of Bhutan. Subsequently, he visited Bhutan regularly, and worked as a short-term consultant for the United Nations agency, the International Labor Organization, in the field of Technical and Vocational Education. Since his retirement from teaching in 2000, Michael Rutland has lived in Thimphu. He was granted citizenship of Bhutan by H.M. The Fourth King in 2006. He was awarded an OBE in 2005 by Queen Elizabeth II for services to British-Bhutan relations and he also holds the Bhutan Coronation Gold Medal. He was awarded the Bhutan Order of Merit (Gold) by the King of Bhutan in 2017. He has made over a hundred and sixty educational television programmes for Bhutan Broadcasting Service. He is a Founder and currently the Vice-President of the Bhutan Society of the United Kingdom (www.bhutansociety.org). For six years prior to becoming the first United Kingdom’s Honorary Consul in Bhutan, a post he still holds, Michael Rutland held the appointment of the first Honorary Consul of Bhutan in the United Kingdom.