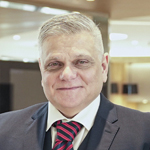 
Dr Khaled Hankir is Lebanese and resident in England. He completed his studies in the United Kingdom, where he obtained several higher academic degrees, including a doctorate in politics and media from official British universities. He also launched humanitarian initiatives and he received a letter of congratulations from the United Nations for his humanitarian initiatives, and was honoured on several occasions, including the provision of 1259 scholarships and university aid to Lebanese and Arab students at London universities, 100 scholarships to Bosnian students during the civil war there, and 200 scholarships to Kuwaiti students during the period of the Iraqi invasion. He also launched the "Save the Children of Syria" initiative, which hosted 350 Syrian children in London. He also represented several academic and expatriate institutions and honoured many Lebanese officials and media figures. He has also agreed to become a member of the advisory board at The Woolwich Institute.